The Mount Allison women’s hockey team’s season ended on Friday, Feb. 19 with a 5-2 loss to Saint Francis Xavier University. This was the second game of a three-game series in the quarterfinals of the AUS playoffs. Mt. A lost the first game, two days prior, 3-0. The Mounties finished fourth in the conference with an 11-13 record. St. FX was fifth, finishing the season 9-15. The Mounties’ higher standing gave them “home ice” in the first round of the playoffs, but they were unable to use this to their advantage.

The Mounties have several positives to take away from their season. Their record improved by three wins, from 8-16 one year ago, to 11-13 this season. First-year player Heather Richards was a vital addition to the Mounties this season. Her contribution of 17 points earned her a place on the AUS all-rookie team. Reliable fourth-year forward Kara Anthony was a consistent threat for the Mounties, leading the team with 18 points through a combination of nine goals and nine assists.  Fifth-year Emily Van Diepen once again continued to be a defensive leader and invaluable asset to the Mounties. She led the team with a +/- of +9, and for the fifth consecutive year, was named an AUS women’s hockey all-star.

Kelsey Taylor – when watching Taylor play you see a smooth skating defensemen with good vision and the ability to start the breakout from the defensive zone. She does many of the little things that don’t show up on the scoresheet, including winning one-on-one battles for the puck and relieving the pressure by making the smart play to clear the zone. Taylor made many plays throughout a game which made her teammates lives easier. She stepped up her offensive game this past season, scoring three goals and adding one assist. Taylor will be difficult to replace along the blue-line for the Mounties.

Samantha Bujold – The top line centre for the Mounties this past season, Bujold contributed both on and off the score sheet. A pass first centre, she was always looking for an open line mate in hopes of scoring opportunity. This didn’t mean she couldn’t score herself if left open, scoring 13 goals in her four-year career. Bujold always showed great poise on the ice, keeping her head up on the lookout for open teammates. This great vision led to her recording 14 assists in her career, including seven in this past season. Top line centres are hard to find, and Bujold was that and more for the Mounties. 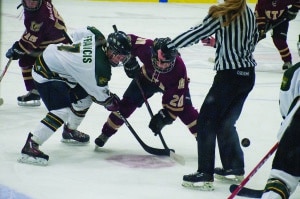 Emily van Dieppen – The number one defencemen for the Mounties, van Diepen did everything. She was solid defensively, constantly matched up with the best players from the opposing team. She was physical, pushing players off the puck and winning battles in the defensive zone. She was skillful, able to jump into the rush and provide offence from the blueline. As steady as they come, you always knew what you were going to get from van Diepen and knew she could be relied upon in all three zones. Throughout her five-year career she played in 106 games, scoring 13 goals and adding 30 assists. She is truly one of the best defensemen ever to don the Mounties jersey.

Amanda Volcko – A shifty winger for the Mounties, Volcko left many defenders behind with her skating ability. She had a knack for indentifying scoring opportunities and finding the right spots on the ice. Blessed with soft hands, Volcko was a threat to score every shift she took. She broke out offensively this season, recording 13 points in 22 games – tripling her previous high. Overall in her three-year Mounties career Volcko scored nine goals and recorded 12 assists. It will be tough not too see the name Volcko on the back of a Mounties jersey next year. 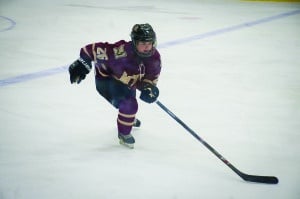 Mackenzie Lalonde – Captain of the Mounties, Lalonde led with her play on the ice. The best pure goal scorer on the Mounties, her quick release allowed her to beat goalies from almost anywhere in the offensive zone. She was always a threat to score when the puck was on her stick. Being a great goal scorer was not all Lalonde showed on the ice – she also had great balance to help control the puck and the vision to find open teammates. Scoring 21 goals and adding 14 assists over her career, the Mounties will be miss her leadership and her top-flight offensive skill.

The Mount Allison women’s volleyball team played their way to a 12-9 record entering the ACAA tournament. The tournament was held on Feb. 26-28 and was hosted by the University of New Brunswick, Saint John.  The Mounties survived a scare in the quarterfinals, narrowly defeating the hosts in a thrilling five-set match. The Mounties met their match in the semifinals however, losing valiantly to the eventual champion, the Mount Saint Vincent Mystics. The pivotal moment of the semifinal game was when the Mounties dug deep and almost took the second set, before eventually losing it 25-23.

The Mounties had a respectable season. They entered the tournament with a 12-9 record, and sat third in the ACCA behind MSVU and Holland College. Their 2015-2016 record was the inverse of last season, in which they finished 9-12. Mt. A will look to continue their improvement next season, but will have to address the difficult task of replacing graduating students Sydney Umlah, Lynne Arsenault and Kayla Vande Kemp. They will look to their roster, which contained ten first-year players this season, to replace the leadership and prowess that the three graduating players provided this year. Madison Archibald is slated to be the only fourth-year player on the roster for next season.

Umlah, the reigning Mt. A MVP, finished the season as a ACAA first team all-star. On the season, she was ninth in the league with 132 kills and seventh with a .163 hitting percentage. Umlah also led the ACAA by a wide margin, with 53 total blocks. Arsenault also had a tremendous season, which resulted in recognition as an ACAA second team all-star. She finished sixth in the conference with 140 kills. 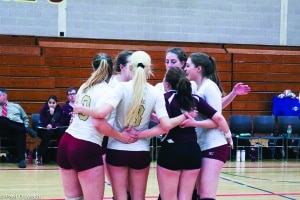 First-year setter Lauren Wentzell amassed 309 assists this season, which places her fourth in the conference. The team also received valuable contributions from many other young players this season. The future is bright for women’s volleyball at Mt. A.

Sydney Umlah – Controlling the net is the main job of the middle position for a volleyball team, and Umlah not only controlled the net—she dominated it. She in many games changed the other team’s strategy as they tried to play the ball away from her. Her great timing and anticipation allowed her to shut down opposing team’s hitters for stretches of every game. As her career progressed she also grew into an offensive weapon in the middle, being efficient with her kills and great placement. The Mounties will have a hard time replacing her tenacity and will to win, along with her ability to lead and control the front court. She will be remembered as one of the best middles to wear the garnet and gold.

Kayla Vande Kemp – Often underrated, Vande Kemp did a little bit of everything for the Mounties at a high level. She could always be relied on in every situation. Defensively she would always position herself perfectly to defend a kill or make a pass from a tipped ball; she would put her body on the line if it meant helping her team win. Over the season she recorded 194 digs. Offensively she always seemed to come through when her team needed momentum. A powerful swing led to several booming kills picking apart the opposing defence. She also possessed a great serve, giving other teams trouble. Recording 17 services aces on the season, Vande Kemp will be severely missed by the Mounties. Her ability to play in every situation and all-around skill will be possibly irreplaceable. 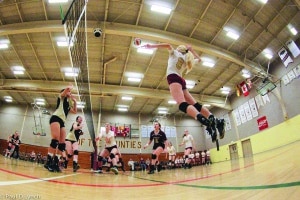 Lynne Arsenault – The best offensive weapon for the Mounties, Arsenault was known for her powerful kills and great jumping ability. She had great timing in the air and the athletic ability to adapt to several different sets that came her way. She had the ability to take over a game, at some points looking like she couldn’t be blocked. Arsenault was not a one-dimensional player. She was a solid passer, with her receiving skills often overshadowed by her offensive prowess. Another great server, Arsenault used her powerful jump serve to overwhelm opponents and create several free points. She recorded 140 kills and 35 service areas this season. The Mounties offence will have a much different look to it without Arsenault soaring through the air for a kill.