Pros and cons of fine arts “Show and Sale” The walls of my apartment are decorated with student art purchased from years of attending Fine Arts Show and Sales. The prints and photos make me feel grateful that I am surrounded by talented peers and am able to support them in their artistic process. I am an altruistic art connoisseur!

Four interviews with fine arts students later, I realize that the Show and Sales are a contentious topic among many artists. Each artist I spoke with offered a different perspective on the pros and cons of the student art sale, painting a nuanced picture of the often-unrecognized complicated relationship between creativity and profit.

Nelligan Letourneau and Lucy Koshan are members of the Fine Arts Society and co-organizers of the Show and Sale. “It’s funny,” Letourneau said, “because I organize [the sales] but I don’t sell my art at them. That’s because I don’t think the art that I make will sell for the prices I want to sell it for because I’m a painter and a drawer, rather than [a printmaker or a photographer].”

Lucy Koshan also chooses not to sell her work at the Show and Sale, but for a different reason. “I don’t show my work because I don’t think it’s good enough yet. I recognize that I’m a student and I don’t want to have my name out there as a person making ‘student work’. I don’t want to be a ‘student artist’, so I’m not going to show my work or distribute it for probably another three or four years.”

Both organizers consider pricing and profit a primary reason why some artists decide not to participate in the sale. “The Show and Sales are usually geared toward work within a certain price range. A lot of people don’t want to buy an individual thing for more than $20. The stuff that tends to sell really well are patches, which people sell for $5 or less,” Koshan said, noting they are still underpriced.

While underpricing products is an unfortunate reality of the Show and Sales, artists are in control of pricing their own work. Koshan pointed out that “in some people’s practice, [recognition and distribution] is an important thing….You have a voice or you feel like you want to say something and that’s why you make art in the first place … so if that’s an important part of your practice, the Show and Sale is really good for that.”

Now in her fourth year, Jen Frail has gained professional experience by participating in the Show and Sale. “I am happy to have an opportunity to sell my work. I think it’s really valuable practice. Getting experience selling our work and figuring out how to price things and how to navigate that part of the process [is] really valuable … if you want to be a professional artist,” she said. 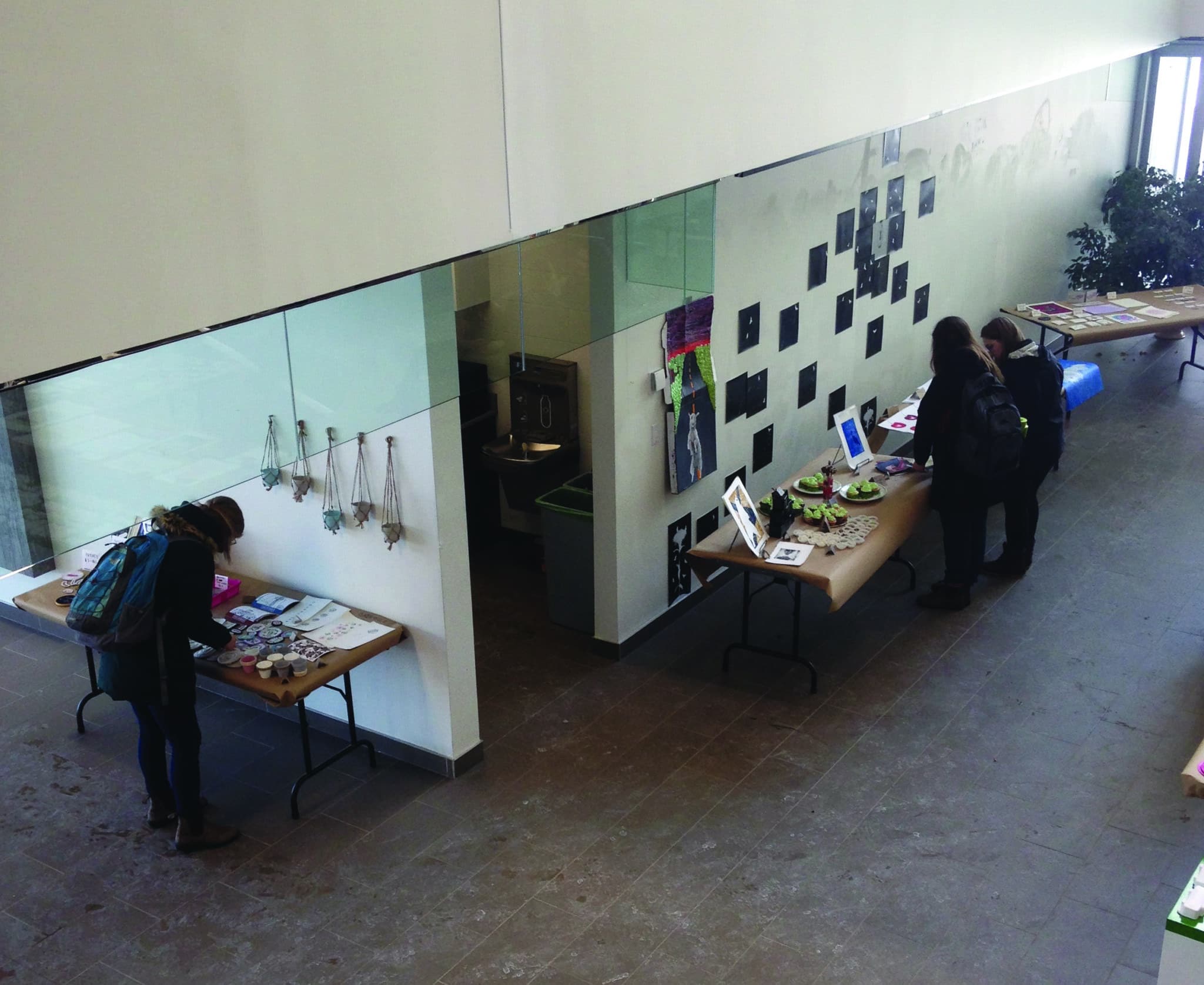 Although she is happy to sell her work, Frail has had to struggle with the difficult task of pricing it.

“It’s hard. It’s a balance. The toughest thing to figure out is how to price things fairly to pay yourself for the time and the skill and the creativity that you put into something. A lot of people who come to the Show and Sale see something and only see the value in the materials.

“I think that’s a challenge we have as artists – to convince people this is worth more because of what I put into it. These materials on their own wouldn’t add up to be this if it wasn’t for my creativity,” she said.

Frail uses the money she makes at the sale to continue to fund her work, a process she finds extremely rewarding. “I think some people have more negative attitudes toward [the Show and Sale] because making art to sell isn’t something we focus on very much in the program … but I think there is something to be said for being able to make something that another person loves and needs to have. ”

Second-year fine arts student Marissa Cruz does not participate in the Show and Sale and is vocal about her reasons not to. “The work that fine arts students make for show and sales affirms the idea that art is strictly drawings and paintings, patches and posters. It supports the flimsy idea that art has to be materialistic, of some physical, quantifiable gain to satisfy our hungry visual, gluttonous appetites.”

Like many of the students who don’t sell their art at the Show and Sale, Cruz abstains because the venue does not cater to her art form. “The kind of art that I make is not something sellable – I mainly do performative work or video art. With that being said, I am not interested in making my work more palatable for commodification,” Cruz said.

Cruz identified an interesting repercussion of made-to-sell art, which she finds the sales encourage. “A pattern I have been noticing is that feminist art sells very well at Show and Sales. I am constantly disappointed in the dilution of feminist issues and lack of intersectionality with the feminist art that is being sold. Feminism is not a fad. I do not think that a patch or a print [or] what have you that reads a generic ‘feminist’ mantra embodies feminist art or femme identity.”

So, what are we non-artistically talented but artistically appreciative people to do? When I asked Letourneau if she felt it was morally responsible for students to purchase artwork at the Show and Sale, she responded, “I think so, because [participation] is at the artist’s own discretion….I think it’s morally okay because the artists are the ones setting the prices.”

Perhaps we can also take some solace – if it is deserved – in the fact that, as Koshan said, “We are our own bosses. No one is exploiting us. That’s the thing about being an artist: You are an agent [and] you are a business person too. You can control the terms that you sell under.”